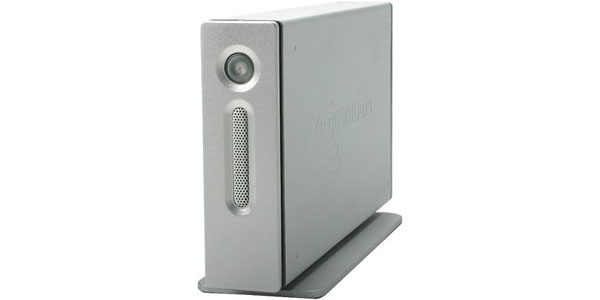 About 2 years ago I purchased this 500Gb Acomdata drive that was on sale at Fry’s, it was a good deal back then, cost me about 100 bucks, it had an aluminium case and a power off switch, and I was in the need to expand the storage capacity of my multimedia server, which is linux based.

I didn’t researched this product, I didn’t even knew that acomdata was a brand, anyway I remember seeing the “Hybrid Drive” statement, but didn’t care, I was going to wipe this drive an reformat it as ext3, so I was aware that all the “software features” it had were useless to me, like the PushButton™ Backup and the Nomad Mobile Desktop.

After I arrived home, I plugged this thing on my server, which had ivman and a custom script to mount anything, but after few seconds nothing happened, I look at the kernel messages and I started to worry, It showed as a CD drive instead of a Mass Storage Device, I tried unsuccessfully to mount this manually, so I thought this drive must be bad.

The next day I connected this drive to a Windows XP, and after some drivers install, it was working, I noticed that it created a virtual CD drive on Windows it had some software on it, so I thought that this was some kind of partition that could be erased after I formatted the drive, so I did this, but the partition was still there.

I did some research on but didn’t found anything useful, so I was again trying to make this stupid drive to work on linux, I hate when I have to fight with the stuff I buy just to make it work on linux, I was very annoyed by this, finally after looking the kernel messages I’ve found that the drive was acting as a SCSI device, so I activated “Probe all LUNs on each SCSI device” in the kernel and after a kernel restart both partitions were available on Linux, however this still had a problem, because I was using ivman to detect the drive and mount it, ivman wasn’t working for the hard drive partition, just for the virtual CD, I’ve tried unsuccessfully to delete the CD partition on windows and Linux with no sucess.

I had enough of this and I was going to take this drive back to the store, but in a desperation moment I took my screwdriver and started to tearing it apart, I wasn’t even stopped by the warranty void seal, my intention was to take the drive format it and put it back without the cd partition, I did this, and the format was successful, the drive was totally empty, but when I put it back to the enclosure the CD partition was still there, at least it was empty this time, but it was there, so this was a firmware issue and I didn’t found a firmware upgrade to remove this stupid feature.

I ended up writing some scripts to detect when this was connected, let ivman mount the CD partition then unmounted and mount the hard drive partition, it took me about a week to have this thing working the way I wanted,  this was  unbelievable, why they don’t put the software to remove this “hybryd feature”.

Anyway this drive has been working fine, with the virtual CD partition still there until Yesterday, I was in the need to transfer some large files from work to home, and this was the drive more reachable from all the drives I had, so I bring it to the office, and as soon as I plugged in the CD partition appeared on my Desktop, so I thought it has been a while now, lets see if I can finally reflash the firmware to remove this so called feature, and I’ve found a forum with several users trying to remove this, after lokking around I found this post:

You need this software from http://www.mediafire.com/?bgwuwq5xzbm

unzip and click on MP251MFG, click on “configure hdd” and once it says pass just unplug and plug in the device. CD PART gone.

I quickly downloaded the file in question, it was a zip file called “REMOVE CD PART.zip” with about 1.5Mb in size, it had a Readme.pdf that described the MP251MFG program, I booted up in Windows, installed the fsdriver because this drive was already formatted as ext3, plugged the drive and run the MP251MFG.exe application this is what I saw:

I didn’t backed up the drive, I was just exploring the options but I clicked the Configure HDD and suddenly a process was started and finished successfully really fast, I was affraid that my data was gone, so I did a quick check to see if the data was there, and it was, I copied the important stuff somewhere else, unplugged the drive and plugged it back in, and voilà, the CD partition was gone along with the data in the drive, but that din’t matter the CD partition was really gone 😀.

The drive was reformatted to FAT32, so I reformatted back to ext3, and now it is working pretty well, 2 years later.